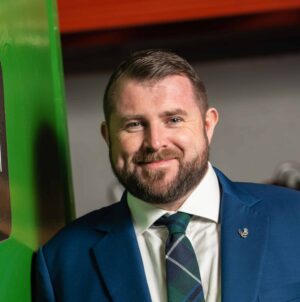 Based in Dubai, Graeme Chalmers is the Middle East regional manager for Motive Offshore Group.  A member of GlobalScot, Scotland’s respected international business network, Graeme is responsible for leading the company’s operations and expansion in the region.

Graeme took up the role in January 2021, following Motive Offshore Group’s acquisition of Flowline Specialists, for whom he had worked since 2011, initially as operations manager.  It was a role in which he was responsible for managing all the firm’s client operations, managing workshop personnel, and assisting with new product development.

In 2015, he relocated to Dubai to establish and develop Flowline Specialists’ successful Middle East division, while also retaining oversight of the firm’s operations.  He became a chief operating officer in 2019 following changes in senior management, playing a key role in the firm’s continued development in the subsequent 18 months.

During his time with Flowline Specialists, Graeme was heavily involved in supporting its international expansion in both operational and business development roles.  He assisted with the set-up of new bases in both Norway and The Netherlands, and launched the Dubai business, successfully growing operations in the Middle East and North Africa, while also working to develop opportunities in Australia and across Asia, and latterly in North America.

His contribution in growing the business internationally helped Flowline Specialists secure a prestigious Queen’s Award for Enterprise in International Trade in 2016, acknowledging its export achievements.

Graeme’s interest in mechanics and engineering stems from his childhood when he worked on the family farm.  Prior to entering the oil and gas industry aged 21, Graeme served his time as a mechanic in the motor industry.  Many of the practical skills he learned during that time have proved beneficial when working with the firm’s range of modular cable handling and deployment equipment.  Graeme’s first role in the oil and gas industry was with a large multi-national service company, providing an opportunity to work overseas and in different environments with many different nationalities.

In 2019, Graeme joined the committee of the newly formed Middle East branch of the Society for Underwater Technology, working with fellow subsea industry professionals based in Dubai and Abu Dhabi to establish a series of events for members in the region.